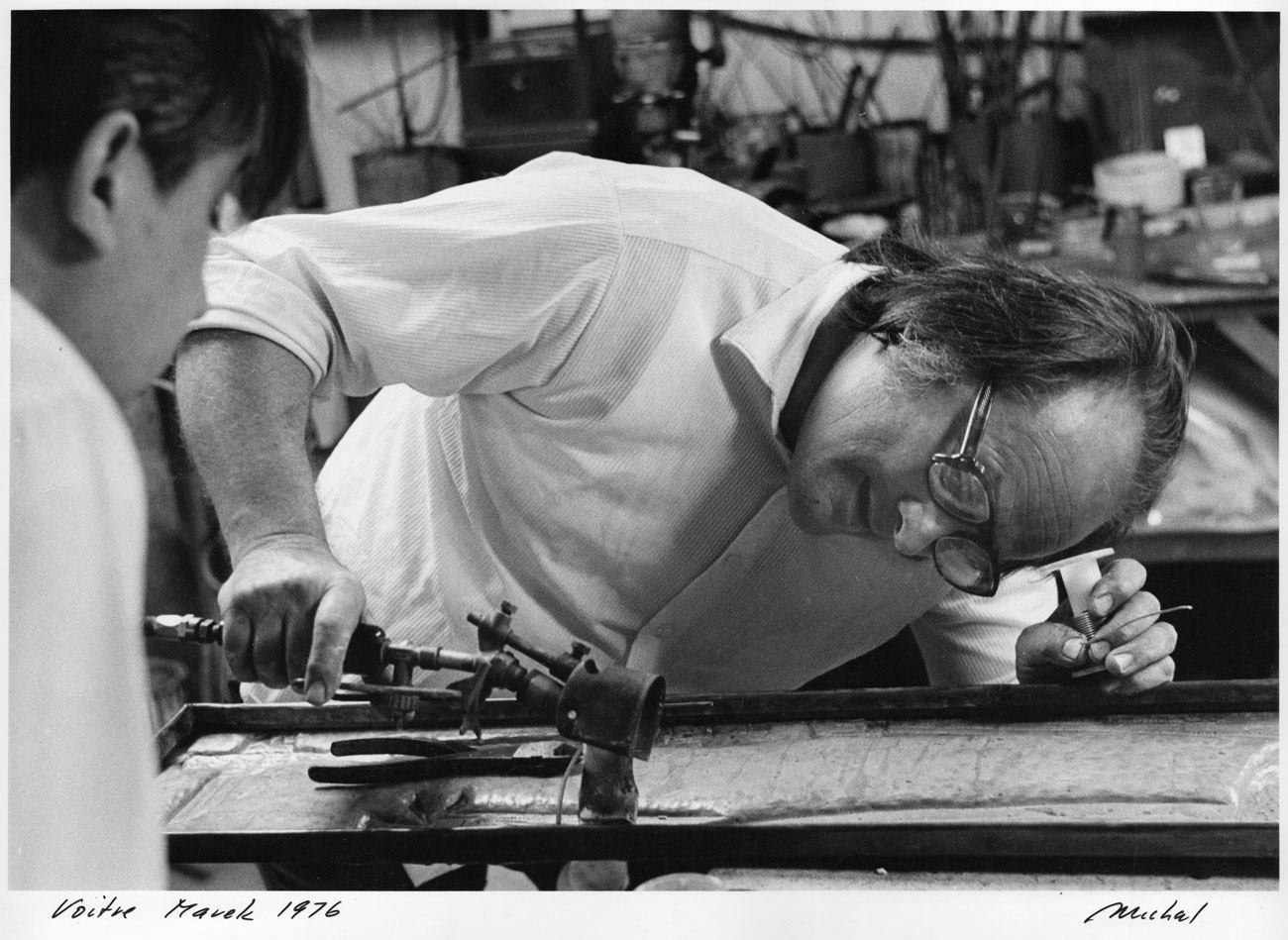 Vojtěch (Voitre) Marek was born in Dolní Oldřichov in Czechoslovakia, now the Czech Republic, in 1919 and came to Australia in 1948.

He was the eldest of three boys born to Vojtěch Marek senior and his wife Hermina, née Schinovska. Vojtech and his two brothers Evžen (Eugene) Marek (b.1924) and Dušan Marek (b.1926) grew up in the area known as Český Ráj (Czech Paradise), some 90 kilometres northeast of the capital, Prague. As a spectacular region of natural beauty containing thick forests, tall limestone pillars and ancient castle ruins, Český Ráj instilled a lifelong love of nature in all three boys.

Voitre initially trained as a metal engraver in Hradec Králové and then studied sculpture in Prague at the UMPRUM (Academy of Arts, Architecture and Design). He established an atelier, working as a freelance sculptor, and was a member of the Czech Union of Creative Artists. In 1946 and 1947 he won prizes for his work.

Following a time teaching modelling and engraving at a Secondary School of Applied Arts, he returned to Prague to study the ‘Science of Comparative Religions’ (‘Religious influence in art’) at Charles University. He had a daughter, Tanja (b.1945), from his first marriage.

Voitre’s brother Dušan showed prodigious artistic talent and studied in Turnov and Jablonec and at the Prague Academy of Fine Arts. As the eldest brother, Voitre supported and encouraged Dušan, who would later become a well-known Surrealist artist in Australia.

Following the communist takeover in 1948, Voitre and Dušan realised they were likely to lose their artistic freedom. They made the decision to flee to the West, together with Voitre’s fiancé, Vera Podperová. After a period at a refugee camp in West Germany, the brothers sailed for Australia in August 1948 aboard the Charlton Sovereign. They landed in Sydney and were sent to the Bathurst migrant camp before moving to Adelaide. Vera, a teacher and translator, arrived in Australia earlier than the brothers; she and Voitre married in 1949 in Adelaide. Dušan married Milada (Helena) Jakubová, whom he had met on board the migrant ship, in 1951. Eugene also escaped across the border out of Czechoslovakia independently and arrived in Australia in June 1949.

They all settled in Adelaide, where Voitre worked as an engraver and jeweller for several years. He continued to practice as an artist, regularly exhibiting sculptural works and drawings in solo exhibitions and in group shows together with his brother Dušan. From 1950 to 1955 Voitre made a great number of small surrealist pen and ink drawings. They were frequently of religious nature and many provided the source material for his sculptural works.

While their children (Olga b.1950 and Ivan b.1953) were young, Voitre and Vera took the opportunity to live and work on lighthouses on Kangaroo Island and Troubridge Shoals between 1956 and 1960. During this time, Voitre decided that he would concentrate solely on his sculpture, as that was why he had left his homeland in the first place.

Upon returning to Adelaide, Voitre worked in a wire works factory, and there discovered and adapted the steel-rod welding technique, which he used for many relief sculptures and also 3D works. The medium suited the simple and elegant style of his drawings and was used extensively in his ecclesiastical work.

Voitre seized the opportunity to create ecclesiastical works in many new churches that were being built in Adelaide and Australia following the influx of Catholic Migrants and the directives of Vatican II (1962–65).

From 1962 to 1975, Voitre worked full-time on ecclesiastical commissions for churches throughout Australia, as well as on several major secular commissions. With two full time assistants, Michael Potoczky and Jan Hooft, and later his wife, Vera, he created works in wrought iron, beaten copper, enamelled copper, carved stone and wood, and his output ranged from small holy vessels using precious metals to large figurative sculptures, baptismal fonts, altars and the Stations of the Cross.

Voitre was influenced and inspired by Byzantine and Romanesque Art, and a Churchill Fellowship allowed him to travel and study overseas in 1970. In 1997 his dedication to serving Christian Churches in Australia was acknowledged through a Papal Blessing. He died after a long illness in 1999.

Initially, it is the extensive body of Voitre Marek’s ecclesiastical work that his family are attempting to record and present here.